Christmas brings nostalgia. It is a time to remember the happy days. Forget the hunger, the sorrows and heartaches of later years, remember only the magic and warmth of a loving hearth.

If I close my eyes I see again flames red and blue crackling in the black-leaded grate, lending a burnished glow to the brass fender in the kitchen of the little terraced house on the outskirts of Nottingham.

The spicy smell of garlic, onions and haricot beans emanating from the magical, everlasting pot that was always ready to fill empty bellies, scents the air. But the pot-au-feu is missing from the hearth, for it is Christmas Eve. Tonight Mamma would not be ladling soup from the great black cauldron that lived on the hob. Tonight, as every Christmas Eve there would be a special feast.

Christmas Eve was special! Not for presents or Santa, although the apple, orange, six bright new pennies and a piece of coal which would magically appear in my brown woollen stocking were a source of wonder, but for the family party which filled my heart with delight.

Aunts, uncles and cousins filled that tiny room to bursting point. Now a days, the guests would overflow into the parlour or invade the scullery but then the parlour was kept in a pristine condition awaiting the next laying out and the scullery was Mamma's province.

Mamma was French and spoke very little English and the air rang with sentences begun in one language and ended in another. When our teacher told us about the Tower of Babel, I thought it must have been very like Mamma's kitchen on Christmas Eve.

Bentwood chairs lined the walls from door to door, each one occupied by an aunt, uncle, mum or dad. Grandad sat in a big chair with wooden arms and Aunt Alice who still lived at home, had a rocking chair in the corner.

Mamma didn't need a chair for she spent the whole evening in the scullery frying up the black puddings she had made earlier in the day.

Every Christmas Eve Mamma made black puddings, only they weren't black. They were a rich chocolate brown and were served in great crusty sandwiches to the grown ups, while we 'petit chou chou,' had chips. Pale soft white chips cooked as only Mamma could cook them.

In the middle of the room stood the big wooden table covered with an orange and white oil cloth. A huge pot jug had pride of place next to Grandad's cap. The uncles threw tanners in the cap and the Aunties took it in turn to take the jug to the beer-off to be filled with foaming brown liquid. The men shouted, 'mek sure it wets your thumb.'

After supper, every one had to do a turn. They all had their special songs. 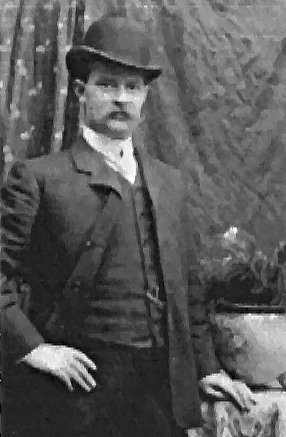 Dad used to sing, 'Silver Hair and Heart of Gold.' and that was Mamma. I couldn't sing but I loved to recite and someone would lift me onto the table to do my piece.

The song we kids liked best was a rude one that Uncle Tom sang. It was about a crow and the chorus began 'Sing brethren sing.' Then followed a swear word and no one was walloped for singing it.

The stars were in the sky when we went home and I would stare into that vast night looking for the one bright star.

Mamma's party began the round. Then each of the Aunts took turns, year by year to have parties on Boxing Day and New Years Eve. They weren't as much fun as on Christmas Eve although we played lots of games like, Postman's Knock and Hunt the Thimble.

When it was our turn to have a party all the cousins stayed the night so that the grown ups didn't have to leave early. We slept six or eight to a bed and and once we ripped a sheet playing sardines only we called it Ten Little ***** Boys- no one knew then that it was a rude word.

I tried after the war to revive the family party but it didn't work. No one had a Jo-anna any more and anyway none of the youngsters could play or sing. I even made black pudding once- but that gave them all a dose of food poisoning so it wasn't a howling success.

Still, never mind, I have my memories and now I see the star of Christmas reflected in my grandchildren's eyes. One day maybe they will look back and remember the warmth and love of Christmas past. Then they too may give thanks for what has gone and what is yet to come.

Grandma was born into a Catholic French family in 1870. She was christened Rose Louise. Her family were poor and already had nine children. When the Sisters from a nearby convent offered to take the child, her family were greatly relieved.

Death of My Father

I identify with Lawrence who declared in Sons and Lovers, 'I loved my Mother as a man loves a woman.' This to me was not an incestuous love but a deep need for approval. A closeness that excluded all others. Such was my love for my Father.

7:30 beep beep beep beep. This is where it all starts, our trip to "Gomez", the best modern band since the Beatles, and believe me I have extremely high standards when it comes to music, so this is a great compliment.

We were able to take a holiday most years as Dad paid me to look after the shop for a fortnight while they took their annual holiday.

"One person I remember from my schooldays is ..."

Of course all teachers were old but she was older than most. There were grey streaks in her black hair and she had a moustache. I can still visualise the brown wrinkly face emerging from her dark grey knitted suit. Her eyes were black and hard like currants and she never missed anything.

So hard to forget.

His bantering tone changed. "The Old Lass said he was in hospital. You'll let me know how he is?" And then as if he couldn't stay serious for long, he grinned. "Of all the girls I've chatted up in all the countries I've marched through, that's the first time I've had that brush off. I'm going to see Dad!" Read more ...

Alan Furbeck paused by the river to admire the blue, white and red sails fluttering, dipping and tacking like giant butterflies. He had belonged to a sailing club once, still remembered the thrill and the spills. He hadn't carried any extra weight then, now he needed care to prevent his muscular frame from laying down fat.

Another holiday. No plans.
Shops open, banks closed
card takes care.
Sit and wonder where
the years have gone.
Did it always rain?
There was one hot Monday
we walked along the prom
above a golden beach. The children are away
of course, a holiday.
How many more days to wait in dry dock?
Memories dance elusive. Dandelion clocks
crushed by the tread of time.
Seeded for today.

What I really want

WHAT I REALLY WANT

I don't want you to give me flowers
fly through ether or leap the balcony.
No Adonis pecs or sexual prowess
will impress or endear you to me - Read more ...

THE WORD
In the beginning was the word,
and the word was God! But now, Read more ...

Ode To My Roof

Always a shelter to cushion my dreams,

has happily been my lot.

What a fortunate soul,